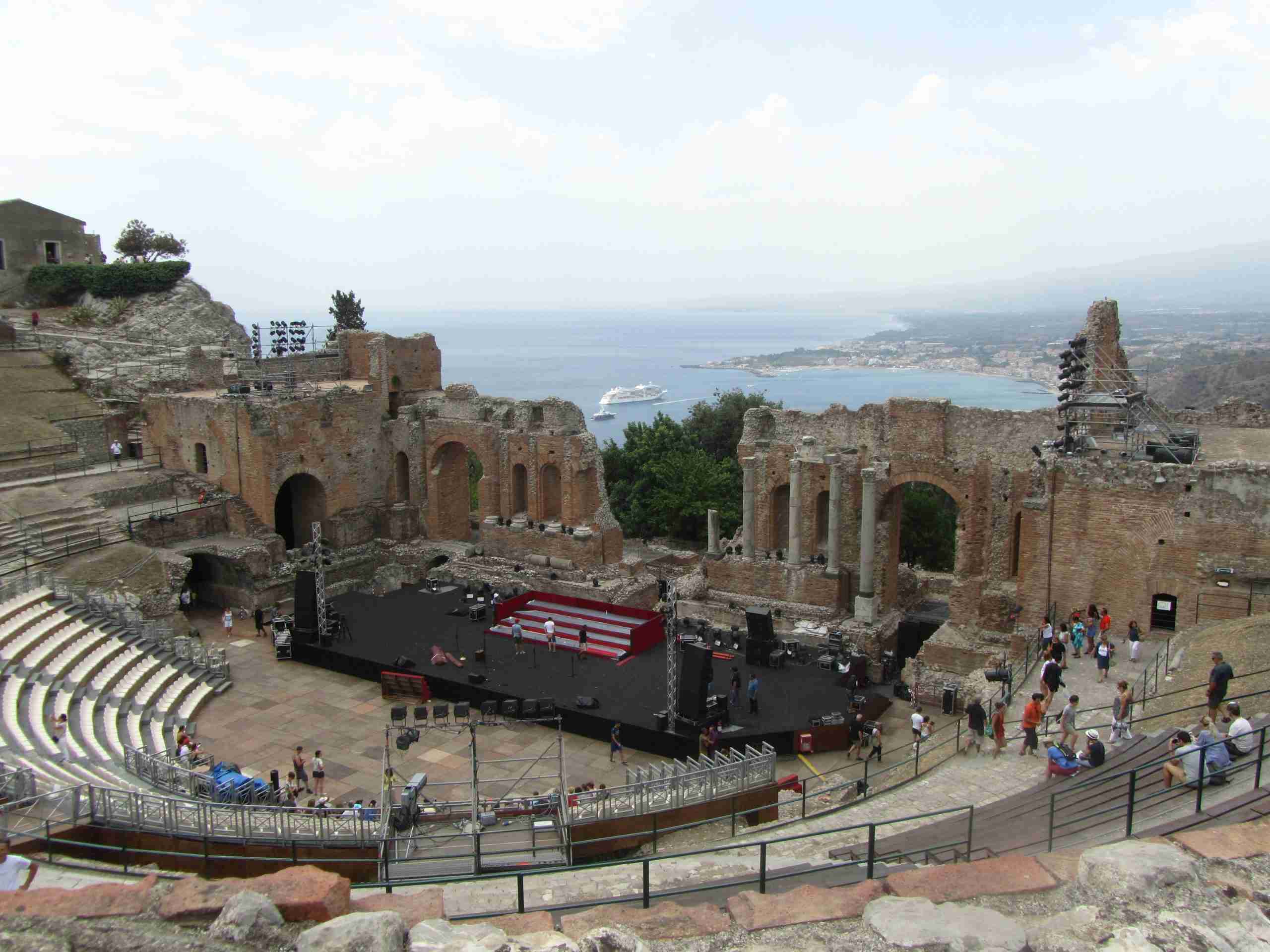 With its beautiful landscapes and monuments, Taormina, in the province of Messina, is one of the most famous destinations in whole Sicily. You only need to think that it was one of the most important stopovers on the Grand Tour, the educational journey so popular in Europe during the 17th century, that the wealthiest people used to take.

Located in the eastern coast of Sicily, on a hill about 200 m above sea level, Taormina expands over a terrace of Mount Tauro, overlooking the sea, thus offering spectacular scenery and views.   Also known as the pearl of the Ionian Sea, this city can really make any tourist dream: let’s go through its history and main attractions!

A brief mention about Taormina’s history

Taormina is by no doubt one of the oldest colonies of Magna Graecia: its history was narrated by classical authors such as Pliny, Strabo and, above all, Diodorus Siculus. According to what the latter reported in his works, Taormina, whose ancient name was Tauromenion, meaning “house on the Taurus”, was founded by the Sicels, the already present population in that area who later mingled with the Greek colonists coming mainly from Naxos, approximately in the fourth century BC.

Afterwards, Taormina stayed under the control of Syracuse, before enduring the domination of Romans, Byzantines, Arabs and Normans. Finally, it was also ruled by The Spaniards and French.

What to see in Taormina: a list of the main attractions

Following the city’s brief historical summary, here is a list of some of the main places to visit while in beautiful Taormina

One of the most emblematic sites of Taormina is certainly the Ancient Theatre, built by the Greeks in the third century BC and enlarged by the Romans. It is the second largest theatre in Sicily, after Syracuse’s one: its cavea, for example, has a diameter of almost 110 meters, divided into nine sectors.

The surrounding landscape is enchanting: in fact, one has the opportunity to admire the crystal-clean, blue water of the sea contrasting beautifully with the colours of Mount Etna’s profile, which stands imposingly in the background.

The theatre has been very well preserved over the centuries and, still today, many shows, concerts and ceremonies are held there.

If you are in Taormina, a walk along Corso Umberto I, bound by Porta Messina and Porta Catania, is simply mandatory! This pedestrian street in fact is the centre of the city: a perfect mix of ancient and modern, shop windows of traditional small shops and international brands, bars and restaurants, Corso Umberto I is the beating heart of Taormina.

While walking along the Corso, you must make a stop at Piazza IX Aprile (9th of April Square), defined as the most elegant “lounging point” of the city: the panorama one can admire from the balcony is breath-taking and partly includes the Ancient Theatre, the Naxos Bay and the majestic profile of Etna.

The history of its name is interesting, as the square is named like this due to a mistake. On April 9, 1860, it was rumoured that Giuseppe Garibaldi had landed in Marsala to begin the heroic feat that would lead to the unification of Italy.

Shortly after, however, the erroneous news was understood: Garibaldi would arrive in Marsala only a month later, in May. Although the rumour was wrong, the citizens still wanted to commemorate that date by naming the square after it.

Built around 1400 on the ruins of a medieval church dedicated to St Nicholas from Bari, today the Cathedral is imposing and one of the main attractions of the city, with its mixture of styles from different ages. The church has a Latin cross structure with three naves.

Its façade, restored during the 17th century, is enriched by a large Renaissance-inspired rose window.

The cathedral is located in Piazza Duomo (Cathedral Square), which has a spectacular fountain in the centre, a work by one of Florentine sculptor Montorsoli’s last pupils, dating back to 1635. In addition to the cathedral, the Town Hall also overlooks this square.

It is worth mentioning the beautiful gardens of the municipal Villa, a triumph of trees and colourful flowers representing an earthly paradise in the heart of the city.

The Villa was originally the park of Lady Florence Trevelyan, a noblewoman of English descent who had stayed in Taormina since 1884 and married the mayor of that time. As the noblewoman wished, the park was conceived as an English garden, with many species of rare and exotic plants.

It became a municipal property in 1922.

Corvaja Palace is located in the area of ​​the ancient Greek agora, later become the Roman forum, and is a perfect summary of Taormina’s history: depending on the different dominations the city was going through, the Palace underwent changes that are still visible today.

The building looks out onto Piazza Badia, Corso Umberto and Piazza Santa Caterina.

Currently, the first floor houses the Museum of Popular Arts and Traditions.

A splendid islet nestled in the Ionian Sea’s crystal-clean waters, Isola Bella is connected to the mainland by a strip of sand one can walk on foot even at high tide.

Many illustrious personalities praised the beauty of this natural landscape, such as Baron Wihelm Von Gloden, Goethe, Byron, Dillon, Geleng and many others.

In 1806, Ferdinand I of Bourbon donated the islet to the Municipality of Taormina, which later ceded it to the English noblewoman Lady Trevelyan (mentioned above in the paragraph about the municipal Villa).

Passionate about exotic plants, the noblewoman introduced a multi-coloured vegetation here as well, besides building her own small house.

Later, the island owners often changed, and in 1990 it was purchased by the Department of Cultural Heritage of the Region of Sicily. In 1998, it was declared a nature reserve, managed by the WWF, the province of Messina and, in recent times, the CUTGANA, the environmental protection centre of the University of Catania.

Since 2010, the Archaeological Park of Naxos is responsible for the protection and enhancement of Isola Bella.

This is just a taste of the wonders you can enjoy in Taormina, so add this beautiful city to the list of destinations to explore in Sicily!