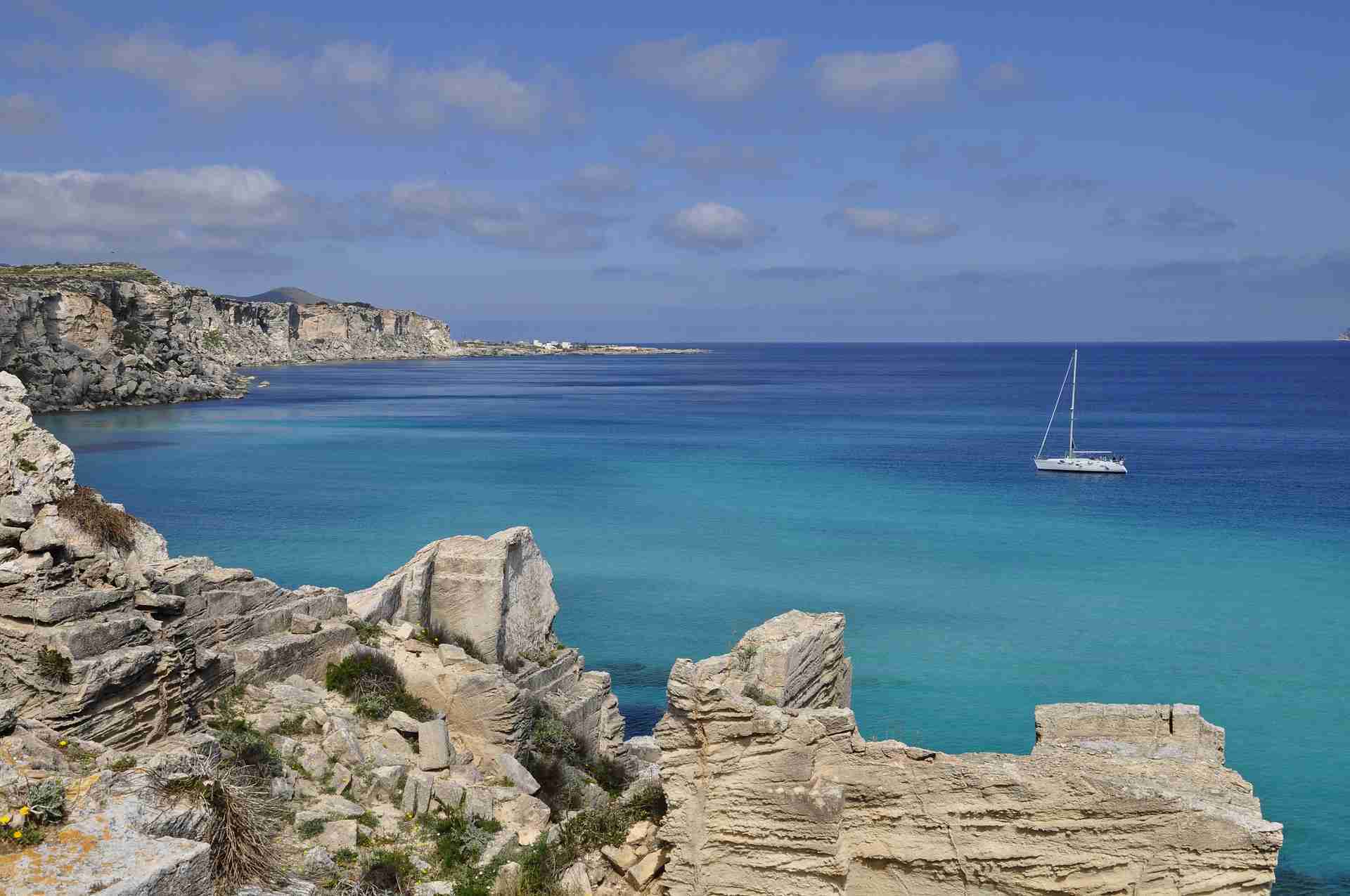 The Aegadian Islands are a wonderful archipelago, nestled in the blue waters of the Tyrrhenian Sea and located about ten kilometres off the west coast of Sicily, not far from Trapani.

Favignana, Levanzo and Marettimo are the three main islands, to which other islets are added.

This archipelago is by no doubt an ideal destination for sea, snorkelling, sailing and hiking lovers. Their virgin nature and great variety of flora and fauna make these islands a real earthly paradise.

Would you like to get to know this enchanting place better? Here is some information you may find useful!

The archipelago was known and populated since ancient times: traces of the first human settlements date back to the distant Palaeolithic Age, especially in Levanzo and Favignana. Most likely, some primitive populations managed to settle on these islands during the last glaciation, when they were connected to each other by a natural passage.

Later, the Romans conquered the archipelago during the Punic wars; it then fell under the domination of Goths, Vandals, Saracens, Normans and Spaniards. In the first half of the 17th century, the islands were ceded to the Pallavicini family and, later, became property of the famous Florio family, who enhanced the tuna fishing industry in Favignana.

Today, the three main islands are under the administration of the province of Trapani. In 1991, the Aegadian Islands Marine Reserve was established and is managed by the Municipality of Favignana since 2001. With an extension of over 50 thousand hectares, the Marine Protected Area of ​​the Aegadian Islands is the largest marine reserve in the Mediterranean Sea. In addition to the three main islands, the archipelago also includes the islets of Formica and Maraone.

Let’s get to know this wonderful archipelago more in detail!

Favignana, the largest island of the archipelago

Favignana is the largest island of the archipelago: it extends for about 19 square kilometres and is located less than 10 km away from the Sicilian coast.

In the past, it was known by various names, such as Aegusa, from the Greek “island of the goats”, Aponiana, Katria, Gilia; Arab geographers called it Djazirat ‘ar Rahib, “monk’s island”, due to the presence of a castle where a monk would have lived on the island.

The current name seems to derive from the foehn instead, a warm wind coming from the west.

Due to its peculiar shape, the painter Salvatore Fiume defined it as “a butterfly on the sea”.

Favignana is certainly the ideal destination for all sea lovers. Its crystal-clear waters, sandy and golden beaches, cliffs and coves make this island a real paradise!

Some of the most popular beaches are Cala Azzurra, Cala Rossa, Lido Burrone, all being characterized by extraordinary natural beauty. Whether you enjoy snorkelling, scuba diving or sailing, you will still be satisfied during your stay on the island!

Favignana therefore offers the opportunity to spend a relaxing holiday, immersed in nature and surrounded by crystal clear waters, away from the noise and hectic pace of the city.

An unmissable stop-over is the island’s harbour, a painting-like landscape that will capture visitors’ senses with its typical smell of salt. The best advice is to take a walk there especially towards sunset, to enjoy a definitely breath-taking view!

Guided visits can also take you to a tour inside the tuna fishery of the former Florio factory, still a fundamental witness of the island’s historic tradition, despite no longer being in use.

The underground gardens, created in the abandoned tuff quarries, are also spectacular.

The island can also be visited entirely by bicycle, so as to reach the coves and the most hidden places that still deserve to be seen.

On the other hand, for a breath-taking panorama you can reach the Castle of Santa Caterina, the highest point of Favignana, which offers a view on the entire archipelago: you can spot the other islands among the shades of blue of the sea merging with the sky.

With an area of ​​just 10 square kilometres, Levanzo is the smallest island of the Aegadian archipelago.

The modernity and hectic life of cities are not part of its reality: there are no cars here, the town is made up of a marina and a small group of houses, where just about 200 people live.

As far as administration is concerned Levanzo is a fraction of the municipality of Favignana.

The highest point on the island is Pizzo del Monaco, with its 278 metres.

In addition to the beautiful sandy and pebble beaches, Levanzo is characterized by the presence of numerous caves, the most famous of which is definitely the Grotta del Genovese.

Inside it, you can admire the wonderful rock paintings dating back to the Upper Palaeolithic period.

Furthermore, the ruins of a Roman wreck have historical relevance an interest, with urns and ceramic fragments dating back to the first century BC lying about 30 m deep near Cala Minnola, a wonderful rocky beach.

The coastline of the island is very jagged and some coves are only accessible by boat.

One of the most beautiful beaches of Levanzo is certainly the Faraglione beach, reachable via the road running along the sea from the town. It is a fascinating, magical place, especially at dusk!

Marettimo, the farthest island from Sicily

Fraction of the municipality of Favignana, Marettimo is the farthest from Sicily among the islands of the archipelago. It has an extension of about 12 square kilometres and just over 600 inhabitants. Its highest point is Monte Falcone, at 686 m above sea level.

In ancient times, it was known as Hiera, meaning “sacred” in Greek, while its current name, on the other hand, seems to derive from the abundance of wild thyme all over the island.

Being the farthest, Marettimo is the wildest island of the Aegadian archipelago: here nature reigns supreme. The low impact of human activity has allowed the island to preserve its rich and varied natural heritage,therefore an essential destination for all trekking lovers!

We also recommend a boat trip and diving, to admire the splendid caves and the seabed.

Also, do not miss a chance to visit the Punta Troia castle, situated on the homonymous promontory, which offers a very suggestive view. It is a construction dating back to the period of Saracen domination and initially conceived as a watchtower.

Subsequently fortified by the Normans, the actual castle was built by the Spaniards; renovated in fairly recent times, it now houses the Punta Troia Prison Museum and the Observatory for the Monk Seal of the Marine Protected Area of ​​the Aegadian Islands.

The islets of Formica and the Maraone boulder

In addition to the three main islands, the archipelago also includes Formica and the Maraone boulder.

Between Levanzo and the Trapani coast lies the islet of Formica: a strip of land, almost a large rock, which owes its name to the invasion of ants attracted by the presence of a sticky plant on the rocks.

Inhabited in ancient times by many populations, this islet is currently a private property and home to “Mondo X“, a rehabilitation centre for drug addicts founded by Father Eligio. On the islet you can still find the remains of an old Florio tuna fishing factory. There is also a museum housing some urns and an ancient boat, once used for the tuna fishing, still kept in perfect condition.

There is also a small church on the islet, called the Church of the rais. Formica also has a port but the docking of boats must still be authorized.

West of Formica there is Maraone, a flat rock, about 600 metres long and completely uninhabited.