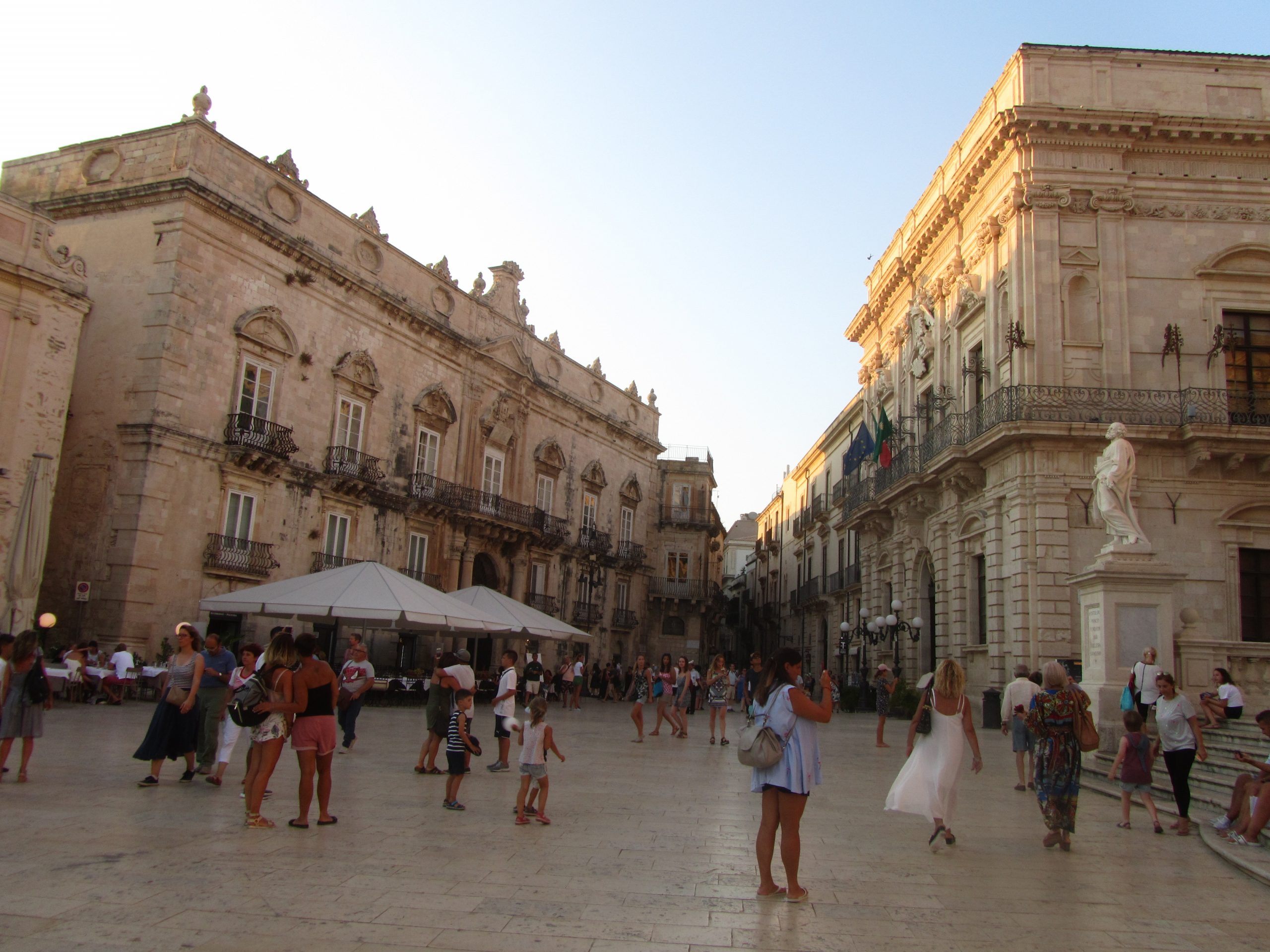 Every year on the 13th and 20th of December in Syracuse, on the south-eastern coast of Sicily, a splendid feast is held to celebrate Saint Lucia, the Syracuse-born patron saint of the city.

Saint Lucia’s cult is deeply felt; therefore, Syracuse dresses up and gets ready to welcome a large number of believers, even from very far away.

Other than in December, the Martyr is also celebrated in May, precisely on the first two Sundays of the month, with what is commonly known as the Feast of Saint Lucia delle Quaglie (meaning Saint Lucia of Quails).

Would you like to know more details about this cult? Here is some information on the history of Saint Lucia and her feast.

The history of Saint Lucia

Lucia was born in Syracuse at the end of the third century, around 283, from a noble, probably Christian family. Fatherless since she was a child, the young woman was betrothed to a Pagan.

On February 5, 301, Lucia went on pilgrimage to Catania together with her mother Eutichia, who had long been ill, to ask Saint Agatha to intercede for her mother’s recovery. During her prayers, Lucia dozed off and the Saint appeared to her in her sleep, lit up and surrounded by angelic hosts, predicting that she could heal her mother herself and her forthcoming martyrdom.

Eutichia actually recovered and once back in Syracuse, Lucia expressed to her mother her will to devote herself to Christ and to donate everything she owned to the poor.

The young pagan suitor, seeing the girl depriving herself of all her possessions and refusing him, decided to report her to the prefect as a Christian: in fact, the decrees against Christians proclaimed by Emperor Diocletian were in force.

The trial was held before the Governor Paschasius, who ordered the young Christian to make offerings in honour of the pagan gods: Lucia, of course, categorically refused. She was then threatened to be taken to a brothel but even this threat did not achieve the desired effect: according to Lucia, where there was no consent of her soul, her body would have not sinned. At this point, Paschasius commanded the young woman to be taken there by brute force, but Lucia became miraculously heavy and no one, neither men nor oxen, was able to move her.

Lucia was hence accused of witchcraft: she was covered in oil and burned at the stake. The flames, though, did not touch the girl in the least. Finally, according to what the Latin hagiographic sources report, a dagger was stuck in Lucia’s throat, while according to the Greek ones, the young woman was beheaded.

According to tradition, she died on December 13, 304, at the age of 21, after having received the Eucharist and prophesied the downfall of Diocletian and peace for the Church.

The iconographic tradition represents Saint Lucia with her eyes on a plate or cup: actually, the story where the martyr’s eyes were gouged out is not present in the hagiographic narrations until the 15th century at least, while according to other stories she took her own eyes out.

Originally, the Martyr was most likely invoked as a protector of sight because of her name, coming from the Latin Lux, lucis, meaning light.

Saint Lucia’s body was originally buried in a catacomb in Syracuse and later transferred to the basilica that was erected in her honour. Due to the Islamic occupation in Sicily, the relics of the Syracusan martyr were hidden in a secret place. During the Byzantine domination in 1039, George Maniakes, general of Byzantium, managed to steal her relics, together with those of Saint Agatha from Catania, and take them away as gift for the emperors.

Later, during the Fourth Crusade in 1204, Doge Enrico Dandolo brought the Syracusan saint’s relics from Byzantium to Venice, where they are still located today.

The Feast of Saint Lucia

As already mentioned, Syracuse celebrates its patron saint more than once a year. The most heartfelt feast is certainly the one held on December 13, whose preparations begin thirteen days earlier (the “Tredicina”), starting from November 30. Five days before the feast, at the Cathedral, the nook containing the Saint’s silver simulacrum is opened.

On the morning of the 12th of December, the silver simulacrum is taken out from the nook to the main altar and in the evening the solemn vespers are celebrated, at the end of which the believers enjoy the “cuccìa“, a typical dessert consumed during the feast of Saint Lucia which contains boiled wheat, sheep’s milk ricotta, candied pumpkin and chocolate.The 13th of December is the long-awaited day. The Pontifical High Mass is celebrated in the morning. Early in the afternoon, around 3:30 pm, some devotees also known as green caps, due to the traditional hat they wear for the occasion, carry the silver simulacrum on the shoulder to the Cathedral of Saint Lucia al Sepolcro.

One of the most moving moments of the procession, which crosses the main streets of the city, is the stage taking place near the Porto Grande: sailors and soldiers perform their salute here, with the vessels’ sirens ringing in celebration.

Upon reaching the Cathedral, the simulacrum is placed on the main altar, where it will stay for the following seven days.

On December 20, called “the eighth day”, the Martyr’s relics are taken back to the Cathedral through another touching procession. The procession begins at about 4:00 pm in the afternoon and, like the previous one, has numerous and moving stops. One of these is the stop at the Umberto I hospital, to pray for the sick. After other stages and the traditional fireworks show, the silver simulacrum of the Saint returns to the Cathedral.

Also known as the feast of Saint Lucia’s Patronage, it takes place on the first two Sundays of May every year, in memory of the miracle occurred in 1646. In that year, in fact, there was a serious famine in Syracuse, interrupted by the arrival of some ships loaded with grain and food in the port. It is said that the extraordinary arrival was announced by a quail that entered the Cathedral (hence the name of the festival).

The short procession on the first Sunday starts from the Duomo and arrives at the church of Saint Lucia alla Badia and on this occasion doves are usually released; the following Sunday includes a tour of Ortygia and the return to the Cathedral instead.