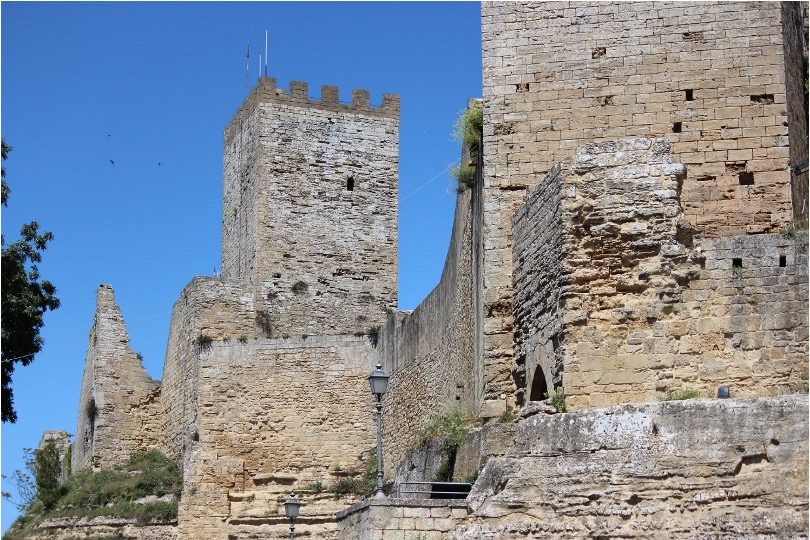 Enna is the only Sicilian province that does not face the sea. Also known as Castrogiovanni, the city’s ancient name, Enna is located right in the center of the island, at about 900 meters above sea level: for this reason, it had been nicknamed “The Navel of Sicily” by the ancients. It is a centuries-old city with deep historical roots: a place rich in history and culture, with numerous monuments. Moreover, since 2004, Enna has been home to the fourth university hub in Sicily, Kore University.

A stay full of history and culture is waiting for you in this city: here is what you absolutely must visit if you find yourself in Enna!

The Cathedral of Enna

Located in the very central Piazza Duomo, this sacred building is dedicated to Maria Santissima della Visitazione. It is the Mother Church of Enna, a city monument in its own right and one of the highest artistic expressions of the entire province: suffice it to say that the Cathedral of Enna has also been recognized as a UNESCO World Heritage Site.

Built around 1300, the structure presents different architectural styles but the predominant one is definitely Baroque, as witnessed by the spectacular side portals. Inside, the Cathedral features a marvelous coffered wooden ceiling, which towers right over the nave.  Numerous works of art further embellish this Mother Church, such as the frescoes by Borremans.

Via Roma is Enna’s main artery and runs for several kilometers, passing through the city’s oldest and most emblematic neighborhoods. Along its sides stand remarkable buildings of various eras and architectural styles, from Baroque to Neoclassical, Gothic to modern. In addition, Via Roma also features many squares, such as Piazza Matteotti, Piazza Vittorio Emanuele II, Piazza VI Dicembre and Piazza Umberto I.

Castle of Lombardy and Pisan Tower

The Castle of Lombardy, together with the Pisan Tower, is a large fortress that stands right on the highest point of the city. For this very reason, it must be considered one of the major symbolic places of Enna. The construction of this structure dates back to medieval times, when it was built as a place of defense against invaders. The castle covers about 26 thousand square meters, making it truly imposing. During the Federiciana week, the city of Enna dresses up and medieval games and markets are set up, including near the Castle. A real plunge into the past, where you can perfectly experience the medieval atmosphere!

Also noteworthy is the Pisan Tower on whose top, after more than 90 steps, there is a breathtaking view of the entire magnificent landscape surrounding Enna.

The Archaeological Museum of Enna was established in the last two decades by the Region of Sicily. Inside, one can admire the numerous archaeological finds brought to light at the end of the excavations that the Enna Cultural and Environmental Heritage Superintendence conducted, especially in 1979, at various archaeological sites throughout the province.

The Museum is located in the vicinity of the Cathedral, in the historic center, inside the wonderful Palazzo Varisano. The Museum illustrates the different historical phases of the city of Enna and its entire province.

The Tower of Frederick II

The Tower of Frederick II, together with the Castle of Lombardy, represents one of the major landmarks of the city. It is an imposing military bulwark, dating back to medieval times. According to tradition, its construction was commissioned by Frederick II, who entrusted the project to architect Riccardo da Lentini in the first half of the 13th century. However, there is a lack of sources and documents to prove this reconstruction of events. According to other studies, the tower would have been built by the Siculians, as an astronomical observatory.

The tower has a rare octagonal shape and is about a half-hour walk from the historical center.

The Belvedere in Enna is a scenic square, historically dedicated first to Guglielmo Marconi and then to Francesco Crispi. It is a rectangular square, in the center of which the Fountain of the Rape of Proserpine stands out.

The Fountain of the Rape of Proserpine is a large marble structure, adorned with a bronze statue representing the rape of the goddess Proserpine by the god of the Underworld.

The view is truly breathtaking: from the Belvedere you can see nearby Calascibetta and the entire northern sector of central Sicily, all the way to the peaks of the Nebrodi Mountains.

The Byzantine village is a literal open-air museum. It is a rock settlement located a few kilometers from Enna, specifically in Calascibetta, just over twenty minutes from the city center. It is a fundamental testimony to the Byzantine domination of the Sicilian territory. The Byzantines arrived in Sicily in 535 AD, led by General Belisarius: the domination lasted until the conquest of Sicily by the Arabs.

The Byzantine village features a series of rooms and cavities carved into the rocks: especially noteworthy are the Byzantine churches and the village dwellings.

Lake Pergusa is located in Pergusa, a suburb of Enna, which can be reached in just over ten minutes by car. It is the only natural lake in Sicily: although small in size, the lake has great importance from a geological, wildlife and cultural point of view.

It was here that the first Special Nature Reserve of the Region of Sicily was established, while the European Union has decreed it a Site of Community Importance. The lake is also surrounded by several hotel and restaurant facilities, completely immersed in greenery and nature.

Along the shore of the lake lies the Pergusa Racetrack, which is about 5 km long. Built in 1951, it has been the scene of prestigious international events, including Formula 1, the World Superbike Championship and the Targa Florio.

What to see around Enna

After visiting Enna, you can head to Piazza Armerina, a charming town that sits on a rise in the Erei Mountains. It is an ancient city with a medieval layout and a wonderful historic center. Definitely worth a visit is the Roman Villa del Casale, which houses precious mosaics, designated a UNESCO World Heritage Site in 1997.

If you wish to stay nearby but visit another Sicilian capital, then you can go to Caltanissetta, just over 20 km away from Enna.

And now, enjoy your trip!